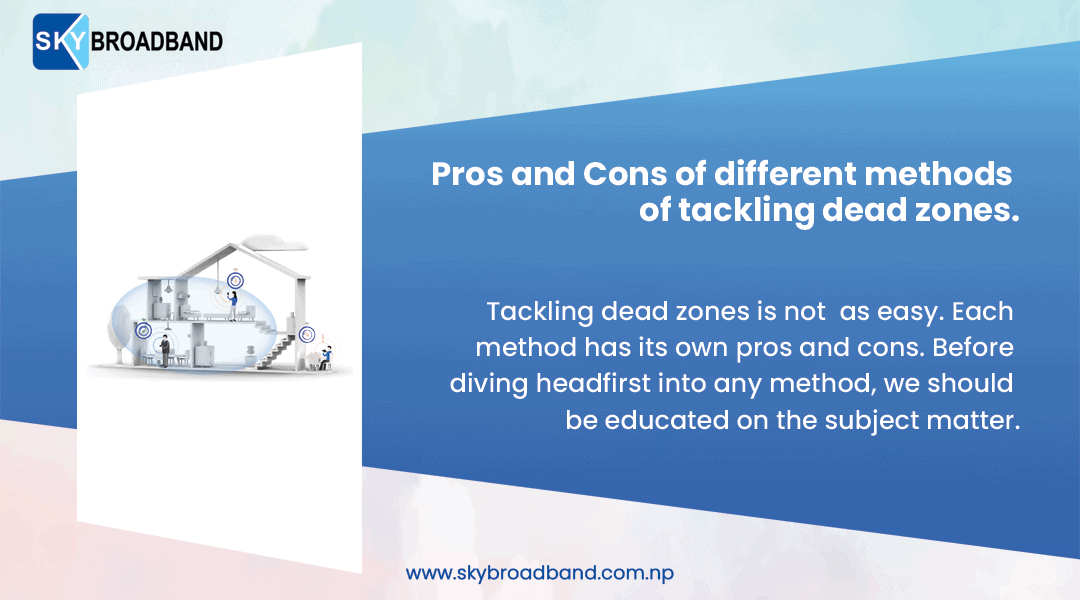 Tackling dead zones is not as easy. Each method has its own pros and cons. Before diving headfirst into any method, we should be educated on the subject matter.

Here are some of the pros and cons of the methods we recommended. 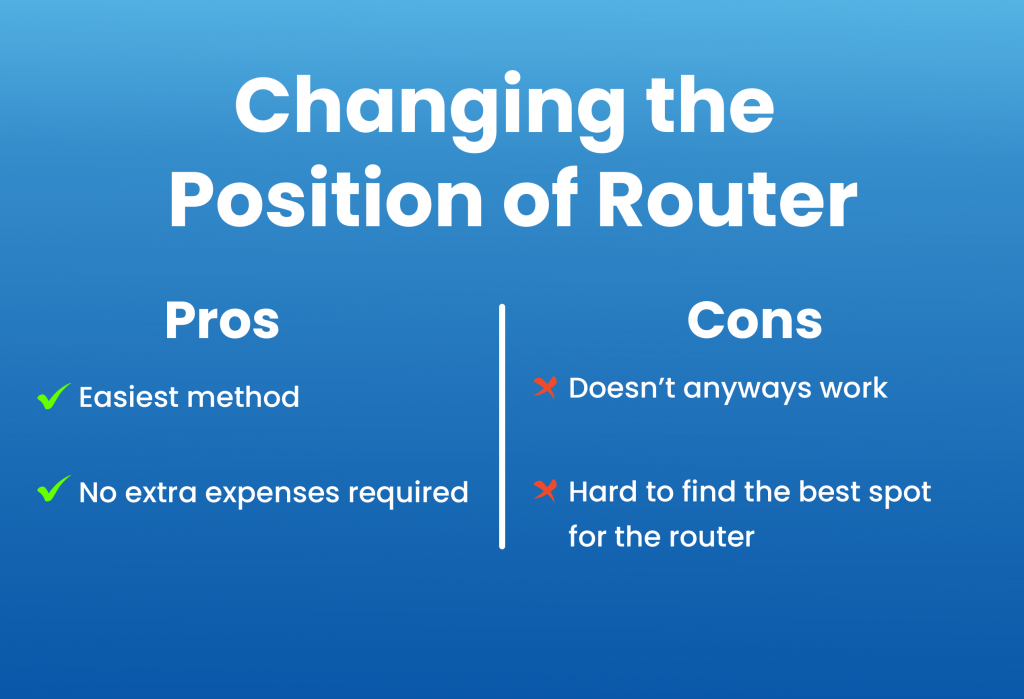 ✅Changing the Position of the Router

☑️Pros:
1. Easiest method:
Changing the position of the router is the easiest method for tackling dead zones. And sometimes, it can be the best one you can employ.
If your router is placed in lower elevation spots like table-tops or in covered areas like cupboards, then it’s almost a guarantee that your speed and range will increase if you place your router on higher areas like the top of a cupboard or wall-mounting.
Placing your router in a place where it isn’t surrounded by other objects will also help increase the speed and range of your WiFi.

2. No extra expenses required:
You do not need to spend any money to change the position of your router. You just move it from one place to another in your home.

☑️Cons:
1. Doesn’t always work:
Dead zones occur mainly due to the range of your router being limited. Along with the range comes obstacles like walls, furniture, metal items, etc.WiFi signal is basically radio waves. And radio waves get blocked by walls, furniture, and anything that has metal in it. So, it might not be the issue of your router’s range but all the obstacles that are blocking your WiFi signals. In this case, even if you change the position of your router, there might not be any noticeable change in signal strength or dead zones.

2. Hard to find the best spot for the router:
Unless one has professional equipment, they can’t find the best possible spot for their home router. As such, this method requires trial and error which can be time-consuming and sometimes frustrating. 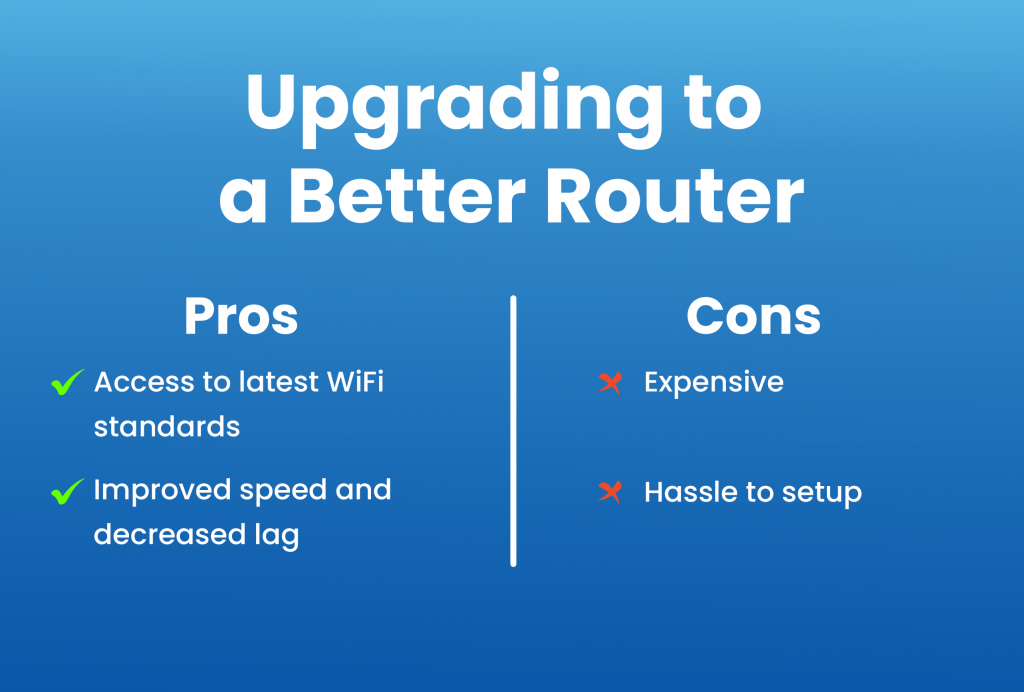 ✅Upgrading to a Better Router

2. Hassle to setup:
A new router means setting up a whole new device. This requires a certain level of technical know-how and being familiar with the UI of the device. This isn’t always possible which leads to a hassle in setting up the new router. 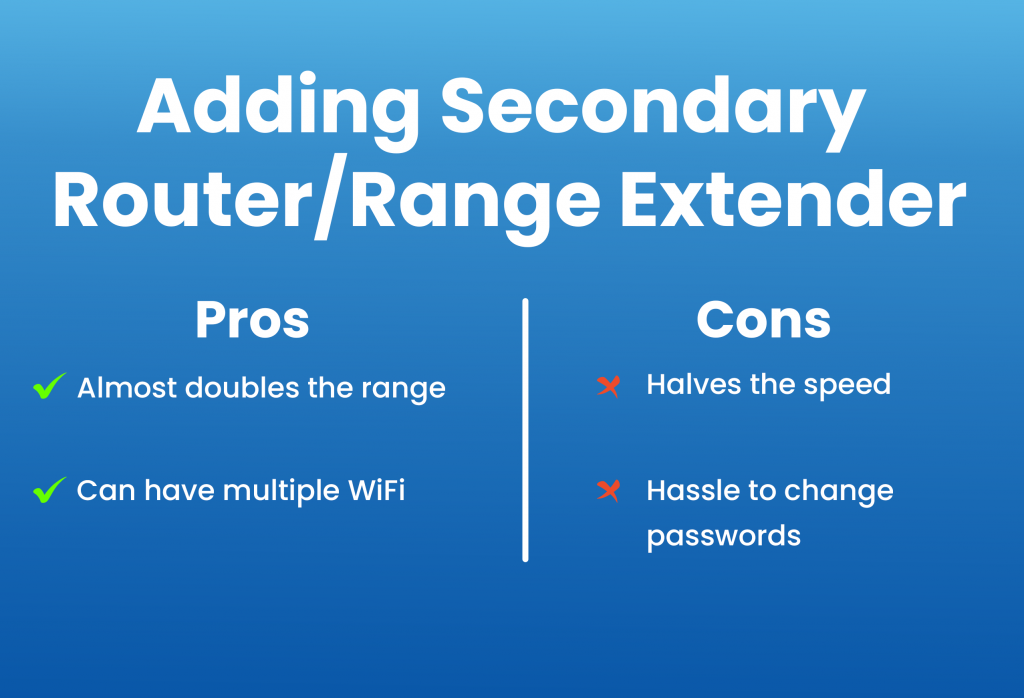 ☑️Pros:
1. Almost doubles the range:
Adding a secondary router or a range extender is basically like setting up a new WiFi. This means that instead of one device providing you with a WiFi signal, there will be two (or more) devices. This effectively doubles (or more depending on the number of devices added) your wifi range, thus covering more areas and eliminating dead zones.

Now that you know the pros and cons of each method, which method would you prefer to tackle dead zones at your own home? 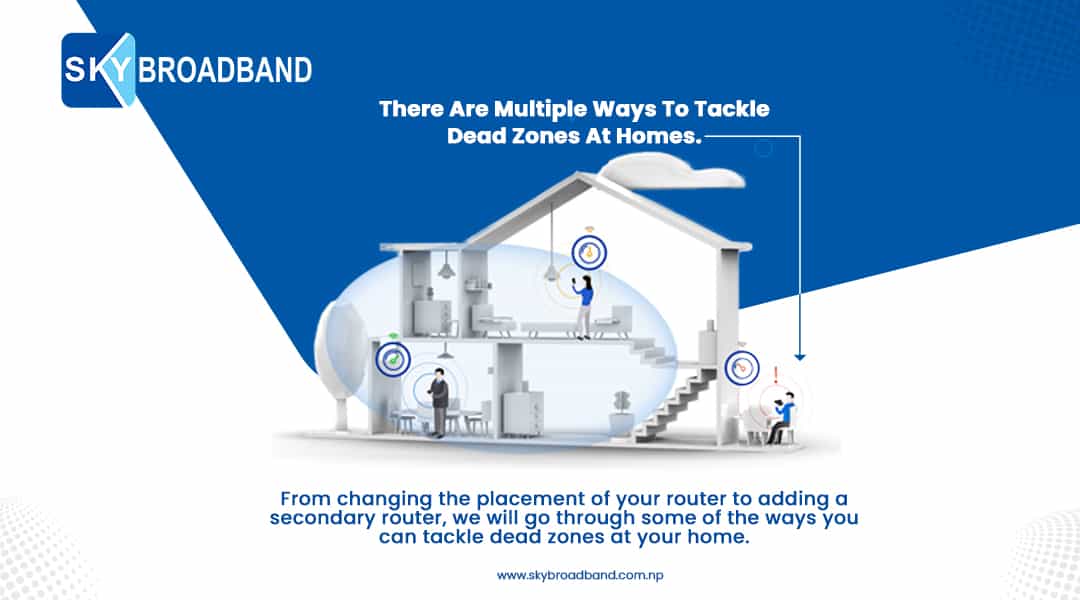 Handling dead zones What are dead zones? Dead zones are specific zones in a home where WiFi signal doesn’t work reach or WiFi …